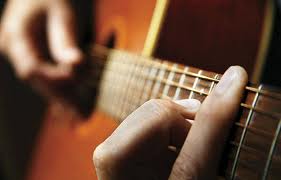 I was chatting with this guy the other day, Derek, and he mentioned that when he first learned how to play bar chords, he only learned one pattern… The one that looks like an E.

He wasn’t actually aware there WERE other bar chord patterns, but he was pretty thrilled with being able to move that one shape all over the fretboard, and essentially use it to cover all the chords he needed.

Unfortunately, that meant that a lot of the songs he played ended up bouncing all over the fretboard a whole bunch.

He’d start with an open E, and then have to zip all the way up to the 7th fret to catch the B chord…

So as a starting point, it wasn’t bad, but man was he excited the day he discovered that there were many more bar chords he could use… ones that would let him play all the chords he wanted in a tight range of just 3-4 frets.

After he learned the new patterns, Derek’s playing took a bit step forward, and today, he proudly told me he now plays about 90% of his songs using bar chords.

He just finds them that much more versatile than open chords.

Now you don’t HAVE to learn bar chords… but if you do, there’s a big reward.

If you don’t currently know how to use bar chords (or, like Derek, only have a limited knowledge of them) then adding bar chords will add a lot of versatility to your playing.

The place to start is right here.

Hi Jonathan, I bought your Bar Chords Made Simple course and I tell you it came at the right time for me, sick of playing everything with open chords and envious of people playing chords all over the neck.

Now that you have given me the tools I need I’m slowly substituting open chords with bar cords on the songs I already know and feeling great when I venture up the neck.