Charting a Guitar Solo Through The Wilderness 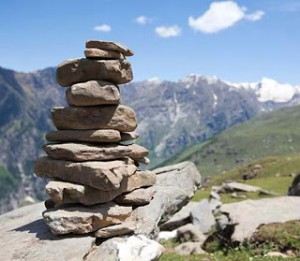 So last week I spent a wee bit of time in the great outdoors – I don’t get to do that enough, but I sure love it when I do get the chance…

Anyhow – have you ever gone for a hike in an area that isn’t very well marked?

Usually, if you’re on some sort of an well-used path, you’ll find these things called rock cairns, which is basically just a fancy name for a pile of rocks, haha.

Other hikers set them up to help people know where they’re going when the path isn’t obvious.

And you know what? Those guide posts function just like guitar scales do, for the guitar player during a solo.

During a solo, you’re essentially charting a path through a wilderness of notes.

The guitar scale pattern points the way, by showing you which notes are the “safe” notes.

You don’t want to fall off a cliff or into a river by choosing a wrong note!

Pick a note from the scale, and it isn’t a restriction… it is instead a freedom to succeed.

And they can, but it depends on the rules. Good rules actually increase freedom, because you know you can do anything you want within those boundaries and not have any problems.

That’s what guitar scales do for your solos.

And guitar scales don’t have to be complicated either, in fact there are just three patterns that I recommend learning in order to cover your whole fretboard.

You can see what I mean here.