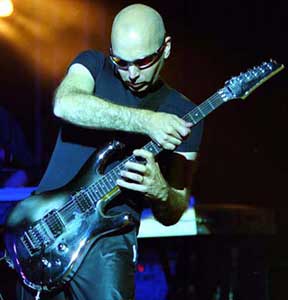 A long time ago I heard someone interviewing Joe Satriani. Not everyone knows this, but Satriani is actually a very good guitar TEACHER as well as player.

In fact, among his students, you’ll find:

So when Satch says something about how to learn the guitar, it’s worth taking note!

And what I heard him say, was this:

“The scale is the solo”

Sound too basic and simplistic?

Satriani relates his solos so closely to the scales, that for him, there’s no difference. Does that mean his solos always sound like scales?

But it means that every note he plays is somehow, in some way, related to the scale, and he knows it and uses it. So don’t let anyone tell you that you don’t need any scales to learn how to solo – you can take it from the best that you do need them.

To learn the three main scale patterns you need, to cover the whole fretboard, and how to relate them to every key, I recommend my Guitar Scale Patterns course.