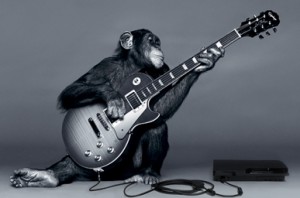 A few years back I lived in Liberia, West Africa for about a year. Long story, for a different day.

While there, I had a pet monkey. He was cool. He liked to ride on the motorcycle handlebars, right up front. He was pretty good at it too, and he’d go on long rides with different staff members, way out deep into the jungle.

You know that famous saying, monkey see, monkey do?

There’s a reason for that, because monkeys like to copy things they see being done. Like riding a motorcycle, for instance.

Now I’m no expert on monkeys, but sometimes I see the same sort of behavior among guitar players too!

Sometimes this is a good thing, like when you want to learn something exactly…

And sometimes it’s a bad thing, like when you’re trying to grasp a concept (or handlebars!) rather than just the facts.

For instance, seeing the bigger picture of how chords work together can make all the difference in how quickly someone learns a new song.

Understanding how the chords are related to the scale makes all the difference when you’re choosing which scale to solo from, or even which notes to play.

Further, understanding how chords work really helps when you’re jamming with other players.

That kind of basic theory provides ideas to work with, new parts to try, things to experiment with.

Unlocking I IV V is the key to understanding your guitar from a powerful new perspective.

It really works, as Beau wrote me:

This lesson is true to it’s name. It really unlocked what I’ve been missing after playing for near 24 years.

Now I understand keys – I’ve been trying to figure this out for years and asking people how to do it.

This lesson finally gave me what I was missing. It has a lot packed in it.

Takes a while for it to sink in, but now I’m creating instead of memorizing!

You can learn more about Unlocking I IV V here.