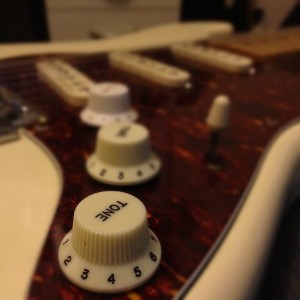 Last week I was at a year end concert for a bunch of local guitar students, and it was fun to listen to how they played.

One particular fellow, in his mid-50’s or so, had clearly wanted to play lead guitar for many years, but had only recently had the opportunity.

Well, that night he got a solo. He sat there up on stage, cool as a cucumber, and played his first solo in front of a live audience of a couple hundred people.

His solo was pretty slow, with nothing really super amazing in it, but – he didn’t play any wrong notes!

That’s because he used the pentatonic scale – and it reminded me that even beginner players can have a blast soloing when that scale is used.

Simply learn the scale pattern, then try to pick out a melody from the notes in the pattern.

Or, play whatever floats your boat!

A great way to practice soloing is to use jam tracks…

It may seem crazy, but using jam tracks like this as a “practice” tool (I put that in quotes, because really it feels a lot more like having fun than practice!) really has a big and noticeable affect on your playing.