Ever struggle to hold together a guitar solo? 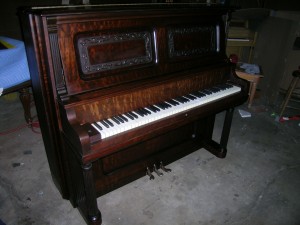 On Saturday I helped a friend move.

The first thing I thought of when he asked me was “Does this guy have an old piano?”

Over the years I’ve moved several friends with pianos… not to mention my own family growing up. (we had this massively heavy thing made in 1908… we also had stairs!)

Anyhow, thankfully he didn’t have a piano, but it reminded me of the last time I had moved an old piano.

You know how certain events trigger memories, every time?

So we’re moving a friend, and everything else is out of the truck. The piano was right close to the tailgate, and the truck was on a bit of a slope.

I come out of the house just as another guy notices the piano is starting to go… he dashes over to the truck and throws his body into this piano, hoping to save it from crashing four feet to the concrete.

A brave thing to do, but if it had gone badly… well, it didn’t 🙂

Nevertheless, the image of him feverishly holding that piano on the truck is forever burned into my mind, hence why I think of it every time I have to move someone.

They’re soloing away, having a merry old time, when all of a sudden things start to get out of hand.

Whatever it is – maybe they lose their timing, they look up at the crowd and get distracted, or they simply run into a mindblock…

Either way, you can tell they went in an instant from “I’ve got this solo totally under control” to “Oh snap – I hope I can hold this thing together until the end!”

Brute force or throwing your body in front doesn’t work, for a guitar solo.

The answer is to head back to your safe zone.

That’s the scale, by the way.

The scale patterns should be the foundation you’re working off to start out with, but I know plenty of times guys end up wandering away.

Same reason skiers go out of bounds, I guess.

But those guitar scales and patterns are your safe zones, because you KNOW every note in there is going to work well.

So, all you need to know are the three most important scale patterns with which you can cover the entire fretboard, and you’re good to go.

I cover those three patterns in great detail in my Guitar Scale Patterns course – plus a ton more besides, so that you really understand how they all fit together and how to move between them.