A jam per day keeps the guitar doldrums away 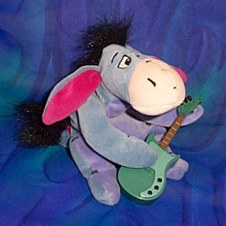 He was as sad as raindrops on a grave, because every time he picked up his guitar to play, it seemed that nothing came out.

So, he’d just sit there, strum a couple chords, woefully reminisce about the days when he used to really enjoy playing, then eventually put the guitar away again, disappointed.

Anyone could see he needed a serious injection of enthusiasm, not to mention new ideas, into his playing.

He’d beat himself up over the fact that he just couldn’t think of anything to play, obsessing over his failure like Gollum with the One Ring in his Cave of Doom.

Rather than join in his little pity party, I told him to pull up his socks and get with the program.

I gave him a bunch of jam tracks, and reminded him of his pentatonic scale – the scale where you literally can’t play a wrong note.

Then I told him to make sure he did at least one jam a day for the next week.

In other words, commit to setting aside just 4 minutes per day to pickup his guitar, hit ‘play’ on one of those jam tracks, and see what came out.

I told him if he can’t commit to 4 minutes per day, then he might be better off selling me his sweet guitar and be done with it.

Hey – anything to weasel a deal on another guitar, right? 🙂

Grinning, he replied that he figured he could manage the 4 minutes, and he would let me know how it went.

Weeks later, our paths crossed again, and I asked him how his guitar playing was coming along.

“You’ll never guess” was his response – “I’m playing at LEAST a half hour a day now, all thanks to those jam tracks!”

“I used to never have ideas, but when I started trying to play along with the jam tracks, my mind started thinking of ideas that would work with the chords, rhythm, and melody of those tracks, and before I knew it, I was jamming again!”

Yup – another case of the guitar doldrums cured!

If you’d like to add some life into your practice time, I recommend the same medicine.

Check it out – you can find some sweet jam tracks here.