How To Be A Star On Guitar 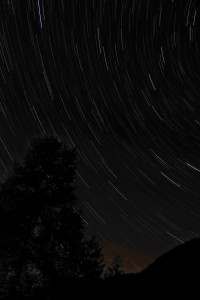 There weren’t quite as many as I was hoping for, but nevertheless, we did see a number of fireballs burning up in the atmosphere…

Not to mention an incredible number of stars!

I’ve taken up a new hobby trying to photograph star trails… In fact, the picture on the right is my very first attempt. We’ll see how far that goes 🙂

Anyhow, I get questions from time to time from people who really want to be a “star” when it comes to guitar.

You ever see those ads that claim to turn you into a guitar god?

The thing is, only a few people are ever going to be the “star” – the exclusivity is by nature limited to a few… and those few are often ones that have an incredible natural talent…

And this is the other side of the coin, where I get questions from people who claim to have no natural talent, and they want to know if they’ll ever be able to play well.

My answer to both is simple: learn some guitar theory.

And, specifically in relation to soloing, learn the 3 essential scales that you need to cover your whole fretboard.

Theory is simply a way of describing what sounds good to our ears. Some people “hear” that naturally… others, at least initially, need a little theory to tell them what is acceptable.

But once mastered, theory has a real equalizing effect – it can be the leg up that you need to compete with the guy who’s really gifted, but doesn’t actually understand what he’s doing.

That’s a big part of the reason why I spend so much time yakking about theory.

Anyhow, if mastering your entire fretboard sounds like something that would be useful to you (and if ya wanna be a star, you just know you need to!) then checkout my Guitar Scale Patterns course.