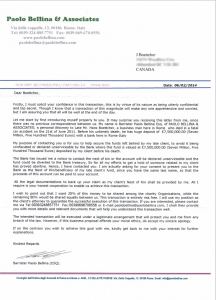 The other day I received a nice letter airmailed from France… you can click on the picture on the right, and read the scanned copy, if you want.

I opened it up, thinking perhaps that one of my students had sent me a note or something like that, but instead to my surprise, I found it was from a lawyer, named Paolo Bellina, in Italy… huh?

So I read on, quickly discovering that unknown to me, a certain Hans Boettcher had perished three years ago in an automobile accident… and this lawyer was now trying to save Hans’ 7.5 million euro bank account from being absorbed by the bank, due to no one claiming it!

The lawyer figured that “since you have the same last name” he can get the bank to pay us – that’s right – he’d split the cash with me – the millions of euros.

I’ve seen these things before of course, but usually they are spam emails… this one was complete with French airmail stamps on the envelope, and nicely typed letter and a nice color letter head… the whole works!

And yet… it’s a complete scam.

It looks good on the surface, but you dig a little deeper, and pretty soon the whole thing starts falling to pieces.

Unfortunately, that’s a little bit like a few guitar players I’ve met over the years.

They’ve learned a few cool licks, and a few cool cover songs, and they can bomb those out just like a parrot can tell great pirate jokes… they work every time.

But at the end of the day, when you pull back the curtain, the parrot can’t explain to you what a pirate is, and the guitar player is lost when it comes to really understanding the mechanics of what he’s playing.

And admit it or not, the truth is that this fact holds him back from becoming all the guitar player he could be…