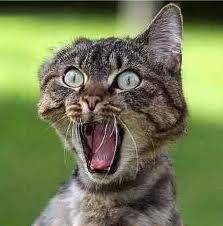 Sometimes animals do the funniest things. There’s a good reason why those cute puppy videos get bazillions of views on Youtube.

Anyway, the other day my cat found herself cornered on the stairs. I was above her, and my dog was below her. In her mind (apparently), this was a high level red alert that required immediate action!

Her choices were to run between my dog’s legs, between my legs, or to jump through the spindles of the bannister beside her.

She chose the spindles.

She goes through those spindles several times on any given day, so the choice was probably logical.

But she dove into it in such a hurry this time, that she got stuck around her hips… and her back legs were wildly trying to push her through, but they were just kicking the air!

Eventually she squeezed through, but needless to say, it was pretty hilarious.

If I had a video of it, I could probably get rich on Youtube.

There’s a lesson here for guitar players too.

You ever watch someone soloing?

You can usually tell if they’re relaxed and enjoying themselves, or if they’re caught off guard and wildly scrambling to come up with something.

The cool cats come in on time, the notes they choose sound great and melodic, and when their slot for soloing comes to a close, they slip right out of their solo and back into rhythm with nary a hiccup.

With a simple nod “it’s your turn” you can drop a cool cat into a solo at anytime, and they’ll always land on their feet, notes a’blazing.

The transitions are seamless – into solo, out of solo.

The startled cat soloists on the other hand, are caught seemingly unawares and off guard, and dive into the solo a bit late and too fast, and often get caught at the hips with a lack of ideas for getting out of their bind.

Their hind legs kick the air for a bit while they repeat a familiar default riff over and over, madly thinking of another good spot to move to, until they get some traction and start to get into things properly.

When they finally end their solo, they get that indignant “no one saw that!” look on their face and slink away into the background…

I should know, because I’ve been there myself.

But there’s one trick that REALLY helps your confidence, giving you that “cool cat” advantage… Jam tracks.

Practice with jam tracks, and you’ll become far more familiar with soloing: what sounds good coming in, going out, and in between.

If you’d like to gain that extra edge in your playing, I recommend adding some jam time into your practice routine.