It seemed like for the longest time, while I was learning to play guitar, that the Bm guitar chord was my arch-nemesis.

I had mastered all the other open chords, but that B minor chord was a really important chord that I just didn't have a good open position for! Yes, I know you can play it using just the top four guitar strings, but I never really liked that position too much, for whatever reason.

As such, Bm was really the first guitar chord that forced me into learning bar chords, and that changed my life. (For a free guide to playing bar chords, click here)

I still remember working on that B minor chord for a couple weeks, and finally overcoming it to the point that it became easy enough to play wherever I wanted.

Today, playing bar chords is second nature to me, however you have to start somewhere right? Having your guitar chords down pat will also do wonders for your lead playing, even if you can't see the connection right now.

B Minor Is Super-Useful

The thing with the Bm chord is that it is really quite an important one in a number of the most popular keys: G, D, A, to name a few. B minor is the relative minor chord of D major, which is a music theory way of saying basically they're cousins. Or siblings, even. If you examine the notes that make up each chord, you will see they are very closely related.

So these two chords share two-thirds of their notes, and on top of that, any key where you find a D major chord, you're going to find a B minor chord as well.

Bm was the first bar chord I learned simply because it was the one I couldn't do without. Too many songs I wanted to play called for a B minor chord, and I was getting frustrated not being able to play it.

One of the biggest tips I can share for learning any chord is to be very slow and deliberate when you're first getting started with it. In practice, this means taking the time to get your fingers right, then picking through each of the strings in the chord one at at time to make sure that every note rings through nice and clean.

If you come across a "dead" spot, you're probably not pressing down on the string hard enough, or you need to back up from the fret a little bit, or another finger is touching that string and muting it. Same thing for buzzing. (Although buzzing can also be caused if your guitar is not setup correctly).

Try to find the most comfortable position to play the chord - I know, nothing is comfortable when you're first getting started, but some things are even less comfortable than others, so pay attention to that! For me personally, the best position for my thumb behind the neck is roughly in line with my first finger, the barring finger. 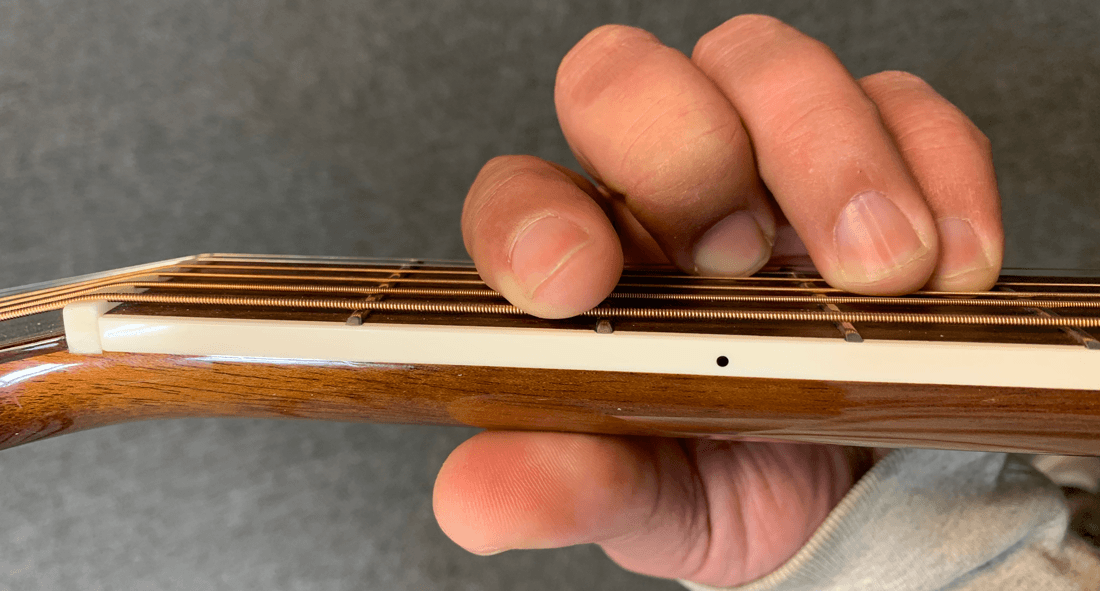 In the picture you can see that my first finger is touching the 6th string, which is a note that doesn't belong in the chord. However, when I play the Bm chord, I don't play this note, and instead, allow that fingertip to rest lightly on the string to mute it, ensuring that it doesn't conflict with the rest of the chord. This is a bit more of an advanced technique, but one you might want to work towards.

My friend Colin put together this great video (top of the page) on some of the issues around the Bm guitar chord - including a couple ways to 'cheat' if you want by using fewer strings. Ultimately though, I recommend working on that full bar chord version as it not only sounds the fullest, but will pave the way for all your other bar chords as well.

If you've been struggling to get that Bm guitar chord down pat, this is the lesson for you.

For more of Colin's lessons, visit him at RiffNinja.com.

If you've got any other tips for playing the Bm guitar chord that weren't covered in here, tell us about them in the comments below!