What was THAT you were just playing? 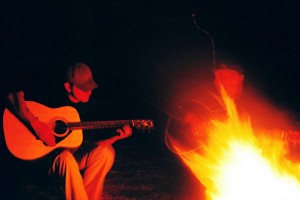 A little while ago I visited a friend’s place – we were over there to have a BBQ, and I noticed he had a guitar sitting in the corner.

So, I grabbed it and just quietly started jamming away in the corner.

I kind of tuned out from the conversation while I was jamming, but a few minutes later when I stopped, I noticed another friend had snuck up and was sitting there watching me play, I assume to look for more helpful hints for his own experience.

“What was that you were playing?”

“Oh I was just fooling around with some 12 bar blues stuff” I replied – which was true – it was basically off-the-cuff blues.

But the thing that intrigued me was that it was the rhythm playing that had caught his attention – the stuff I was playing was really fairly simple, chord wise, basically just I IV V kind of thing, but because I kept on changing to different chord voicings, and throwing riffs in here and there, and swapping up the rhythms, it actually sounded pretty cool.

And that got his attention – a lot more so than a little solo would have (what’s a solo worth, unless you have a band to back you up??)

Anyways, it’s that kind of playing that Robert Renman gets into with his course Introduction to the Blues.

The course is priced quite reasonably, and it could really add some extra depth to your playing…