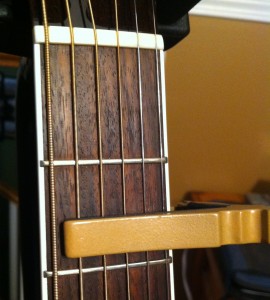 So grab your guitar capo, and place it on the second fret – but don’t let it touch the low E string, the 6th string. (See the pic on the left) Leave as much room as possible for that string, because it will be vibrating and buzzing around a bit, and it does need it’s personal space! Remember, it’s a good idea to re-check the tuning on your guitar at this point.

What we’ve done here is create a tuning that looks like this: E-B-E-A-C#-F#. This is very similar to Drop D tuning, which would be the same thing but a whole tone down. However, there is one major difference, and that is that we’ve not actually changed the tuning; we added a capo. Therefore, the intervals between the strings are the same as in standard tuning, and none of our chord shapes break, unless they’re using the open 6th string.

What I mean by that is you can go ahead and play a G major the same as you normally would, (properly moving up two frets to accommodate the capo of course) and there is no problem. In Drop D tuning, you’d have to totally change how you created that G major chord, because of the difference in tuning.

So that presents some interesting possibilities, chief of which is getting that low E to really ring out nice and beautifully, while shifting everything else into a slightly higher pitch. In my ever so humble opinion, this creates a really cool effect, and it’s something I’ve been playing around with quite a bit since I shot this video.

So grab your guitar and capo, and let’s dig into a few cool things that you can do with this alternate tuning.

The One String Rockstar Riff