The most self-conscious guitar player in the room

Basically he loves to play guitar with his mates, but his big problem is if there isn’t a page of chords in front of him, he’s totally lost.

He kind of gets by, bit by bit, by watching the best player in their group, but inevitably, he’s always a strum or two behind the group, because it takes him that long to recognize what new chord they’ve moved onto.

Usually the others are pretty good about it, but whenever other people are watching them play, Chris gets pretty self-conscious. 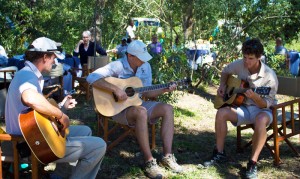 He confided in me that he really doesn’t understand much of anything about the guitar, he really only knows the shapes of a few chords, and if you tell him to play a G, he can.

Beyond that… well, it ain’t pretty.

He was asking me what it would take to become a REAL guitar player – not necessarily one that was super good, like a rockstar or something, but rather just someone who could play CONFIDENTLY at a level that would make him happy.

Chris doesn’t have stars in his eyes – all he really wants to do is play with his mates once a week, but be able to keep up!

It drives him up the wall that his friends can take a key – say the key of G – and just start jamming… because when they do this he basically puts his guitar down and goes to look for a drink or something, so he looks “otherwise occupied” and not like he doesn’t actually know what to do there.

Click here to find out what I told him…