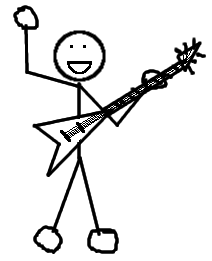 One summer night a while back, I met this guy named Aiden.

He was playing guitar at a campfire and he sounded pretty good.

Nothing he played was that complicated, but the songs sounded good, and everyone was enjoying it.

After a while, one of the other guys asked him how long he’d been playing for, and they got to talking.

The funny thing was, as I listened to what he was playing, I realized that nearly all his songs were in the same key, using the same few chords.

They asked him to play a certain song… turns out that song requires a B chord.

He replied in a matter of fact manner that he didn’t know how to play that guitar chord yet.

No one seemed to mind, and the conversation moved on…

But I sat in the corner and nursed my hot chocolate, contemplating how this Aiden fellow had managed to sound so good, and yet apparently know so little about the guitar.

I kept listening, and then all of a sudden, it struck me.

His secret weapon was his strumming!

This guy rocked at strumming! Sure, he only knew a half dozen chords, but by altering his strumming appropriately, each song sounded totally different than the last one.

The chords in the progression affect the sound of the song, but the strumming has a massive affect on the final product.

To take your strumming to the next level, I recommend taking advantage of Colin Daniel’s Essentials of Strumming & Rhythm course.

As an extra bonus, if you order the DVD version of the course, you’ll get the course book in hardcopy, for free.

Strumming can be the secret weapon for a beginner, so start working on yours today!