Have you ever wondered what a good home recording studio setup looks like? A friend recently recommended I take a look at Owen Critchley’s Easy Home Recording Blueprint because he thought it was a great course, and so I did! (Full Disclosure: Owen graciously gave me a review copy of the course). After reading through Owen’s course, I knew I had to do an Easy Home Recording Blueprint review, because honestly this course was quite different than I was expecting. So let’s dig into it.

Owen is a great musician in his own right, though that does not make one automatically a good sound engineer. I’ve met plenty of musicians who can barely tell you what to plug the mic into; and yet they can play or sing like nuts. Likewise, typically you’ll find sound engineers who are real gear heads, but can’t play a note to save their life.

From what I gather, Owen started out as a musician first, and only got into the home recording end of things as a means to an end. Over the years he became very proficient at it, to the point that a producer at Warner Brothers actually chose his home recorded version of a song over another version of the same song, recorded in a full on professional studio.

In my books, that qualifies him as both musician and sound engineer. (See the video above for an example of Owen’s work).

Now the interesting part about Owen Critchley’s philosophy of recording music is that he is an artist first and foremost. Despite knowing all the technical stuff related to a good home recording studio setup, Owen stays extremely focused on keeping this as simple as possible. The KISS rule definitely applies. I think this is what appealed to me most as soon as I started reading.

The Easy Home Recording Blueprint doesn’t read like a technical manual; it is very much written with the end user in mind.

Ok, maybe you’ve met someone that has dumped thousands (or tens of thousands) into their home recording studio. Maybe you are that person. The entire thrust of the Easy Home Recording Blueprint is the elimination of costly equipment… which makes it the polar opposite of nearly every other home recording studio setup guide you’re likely to find out there.

Owen explains and demonstrates that two mics are ample for nearly every occasion… and we’re not talking about expensive mics either. All told, the gear required for Owen’s setup is kept remarkably simple… he even uses free software for the most part.

Let’s talk specifics about what the Blueprint looks like.

Unlike live band recordings, you’re probably going to be recording your tracks sequentially (one after the other), so it is important to know which order to record them in. Owen goes through this in detail, and makes some great points about why certain tracks need to come before others. If you don’t think of this beforehand, you’re going to find your recording doesn’t sound nearly as good as it could if it were planned out properly from the start.

Ever wondered how to mic a drumkit, or how you were going to get the best sound out of your electric guitar, or how to best mic a voice? These and a lot more instruments (let’s call your voice an instrument for now, okay?) are covered in detail, and Owen shares his tricks for dealing with each one… always keeping in mind his overall philosophy of keeping it simple, and completely revolving around the creative musical process.

Hopefully you don’t live upstairs from a machine factory, or next door to a construction site, but even if you live in the middle of the forest, you may be surprised at the amount of white noise that is present in your home. Go into the room you’re planning on using for your home recording studio, shut the door, and sit down, and just listen.

What do you hear? A refrigerator? The furnace? Lights? Outside noise?

Unless you’ve got a completely soundproofed room, you’re going to have to deal with some level of noise pollution. Owen goes through several tricks to help you deal with this as cheaply as possible, depending on where your problem spots are. Something new I learned in here was that mic stands themselves can often vibrate enough to cause a hum on your recording track! 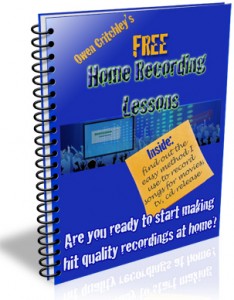 Overall I have to say I was impressed with Owen Critchley’s Easy Home Recording Blueprint, and I’m not just saying that to make it sound good. I’ve experimented with home recording a number of times over the last ten years, and I know first hand how technical things can get – real fast! I’ve spent hours looking for answers on the forums, and I also know how difficult it is to get the exact sound you’re looking for, and how hard it becomes to mix down tons of tracks. So having had those experiences, I read through Owen’s guide with interest, and learned a lot from it on the way. He’s motivated me to get a better pair of speakers, and to start recording again!

This isn’t about being good with computers or having a ton of money to throw at the problem… this is all about a home recording studio setup that allows your creative musical ability to really have free rein to create whatever it is that you want to. Let’s face it, the fewer steps involved in the creative process, the higher your output is likely to be. If you’re finding this Easy Home Recording Blueprint review on my site, versus on some technical audio forum, then chances are you’re first and foremost a musician (and not necessarily a gearhead), and therefore this approach should appeal to you.

Who is this course for?

I’d recommend this course for:

For the price (it’s only $37.95 for the premium edition) you’re likely to save hundreds of dollars in equipment purchases. Even if you never get all the gear Owen recommends (and trust me, it isn’t that much, relatively speaking) his home recording studio setup tricks are well worth the money. Even with a single cheap mic and free software, you could start to get something together using Owen’s techniques.

Final conclusion? For a home recording studio setup guide, this one is top notch and well worth the price.