The Foundation For Awesome Guitar Solos

Recently I released my Secrets of Tasty Riffs & Solos course (which guitar players seem to be really loving, by the way).

It focuses very deeply on using thirds in solos – both in double stops and single note lines. A lot of folks recognized that the course was a little over their heads, but at the same time, they really liked what they saw and heard, and wanted to be able to play like that because well, those thirds are just so dang tasty!

So, the question I’ve been hearing is this: what do I need to do FIRST, to get my playing up to the place where I can learn those tasty techniques?

Well my friend, a good guitar solo never comes completely out of the blue. There’s this myth floating around out there that says that good solos come straight from… the heart. That sounds great and all, but if it were *exclusively* true, you could give a guitar to anyone passionate enough and they’d be able to peel out a great solo on the spot without previous training.

We all know that won’t happen, so clearly – although the heart is involved – there are obviously other factors at work too!

The truth is that a great guitar solo is like a cool piece of architecture: it’s amazing to look at on first glance, but when you try to build it, you realize you need a foundation, you need to understand the ground it will be built on, you need certain materials, and you need a bunch of other elements that aren’t immediately apparent to the casual observer.

Today we’ll talk about two foundational elements that play a massive role in laying the groundwork for great solos.

One of the most foundational elements of all is learning some guitar theory.

I simply can’t overstate the impact this has had on my own playing.

Learning the relationships between notes, chords, keys, scales and all that good stuff gives you a way of problem solving things on the guitar.

If you don’t have any theory, you can’t define your problem, and you don’t have ways of solving it either, apart from trial and error. (Hint: that’s the really slow way to solve problems!) Theory is the language musicians use to communicate, it contains everything we need to be able to pass on musical ideas, and to develop them in creative directions.

Keep in mind that I’m talking about practical music theory here; not learning a bunch of high falutin’ terms you’ll never use but instead, learning extremely practical tools that have immediate impact on your playing.

If your guitar theory needs a tune up, you’ll love my Unlocking I IV V course – it’s a tremendously practical approach to guitar theory that has produced “light bulb” moments for thousands of guitar players.

I am so pleased with your 1-4-5 lesson. I have purchased lots of guitar/fretboard theory books but only had a vague idea as to how all the concepts were related.

Then I discovered your lesson! The light actually went on and I was able to pull everything together. Now it makes sense and I would like to thank you for doing such a fantastic job.


The second foundation is also tremendously important, and it ties in with the first. I’m talking about guitar scale patterns – the key to your fretboard. Once you understand how scales work, you discover that the fretboard is in fact covered in scale patterns that all tie together very nicely.

Learn the most important patterns and you have the ability to find good sounding notes anywhere on the fretboard you choose.

There are two massive benefits of learning scale patterns:

a) You learn where all the good sounding notes are for that particular key. When it comes time to solo, trust me, it sure helps to know where the good notes are to be found! The scales help you avoid the landmines that can blow up your solo into an embarrassing mess.

b) Practicing patterns means your muscle memory improves. This is the key to speed and accuracy in your solos. As muscle memory begins to take over, the amount of actual thought required is reduced, meaning your brain bandwidth is opened up to start thinking more creatively.

A friend of mine who is a very good piano player (with lots of education to back it) watched me solo one day – he also plays guitar by the way. Afterward he asked – are you using scales or something when you play? He’s a pretty good guitar player as well, so his question surprised me. The fact was, with all that education and theory and everything else, he still had not connected the dots and applied scales to his fretboard.

If you’re unsure how scales work on your guitar, and you’d like to unlock your entire fretboard, you’re going to love my Guitar Scale Patterns course.

…Even after more than 30yrs I never had any “lights come on” in terms of my theory that I learned many times over the years.

I started with your scales course and have spent a good bit of time working on those… Your method and written material have been excellent for me!! Your pace and explanations are great and visuals are most helpful.

Last night I had a friend over and we started jamming and guess what??? THE LIGHTS WENT ON!!  Your scale instruction came through like a CHAMP.

I have never been shy about improvising but in just a few weeks of studying your course, I was playing at a whole different level and wasn’t just faking it!!! The use of my fingers was so much more efficient and clearly the knowledge of the scales gave me so much more in terms of tools and knowledge to work with!!!

By the end of one 20 min jam the adrenaline was pumping through me and I have never played so well and felt so satisfied on the guitar in my life!! Your lessons clearly helped me accomplish this wonderful experience. THANK YOU SO MUCH!! 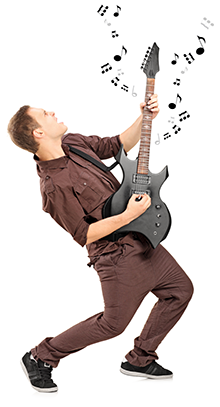 After you have these two foundation stones in place, there’s still plenty more to learn 🙂

Riffs are short musical phrases that relate directly to the scale – think of them like words, and think of your solo like telling a story. The more riffs you have at your fingertips, the better story you’ll be able to tell, right?

No one wants to finally get the spotlight, only to say “The brown dog ran.”

So learning and practicing riffs is tremendously helpful.

Beyond that, there are many directions you can go with your soloing: different styles and genres, perhaps you like blazing fast shred metal, or maybe you like country chicken pickin, blues, rock, or something else entirely.

One option that helps with just about all the above is learning how thirds work. I’ve dubbed the third as being the “tasty” interval. It’s crazy how many “tasty” riffs and solos are built upon this interval. But don’t take my word for it, check this out:

I have purchased several of your courses and I am just getting started on Secrets of Tasty Riffs & Solos. A light bulb went on and I pulled out the TAB on one of my favorite acoustic songs, Operator, by Jim Croce. I have studied the accompanied guitar part by Maury Muehleisen and could not figure out how he came up with such beautiful fills until now. He is playing thirds and like your intro part of the course, in the key of G.

I believe what you say about how “tasty” these can sound as I have always loved the guitar on that song and now I know why!

Thanks!
~ Craig C. in Oklahoma

If you’d like to add that “tasty” factor to your playing, you’ll love Secrets of Tasty Riffs & Solos!

Welcome to Nerdville
Climbing with Thirds
The Three-Note Super Weapon Riff
Rhythm Players: How to take it to the next level
Hard Stage Blues by Luca Sestak