Bar chords is one subject that stumps quite a few guitar players, mostly because initially they are harder to play than open chords.

A bar chord (sometimes also spelled barre chord) is called that because you essentially create a ‘bar’ with your index finger, fretting all six strings at once. Then, you create the chord shape after that with your remaining fingers. Naturally, this type of chord is going to require more finger strength, because you’re physically pressing down more strings than with open chords.

The fact that bar chords require a bit more strength to play however, should not be a deterrent. It should simply be a good healthy challenge to take your playing up a notch. Let me explain why.

Being able to play bar chords adds so much versatility to a guitar player. With bar chords in the bag, there are no limitations to which key you can play in, which chords you can use… everything becomes roughly equal. An Eb bar chord is just like playing an E, a Bb like a B.

For lead players, bar chords allow you to play along with the rhythm in a tight grouping close to where you’ll be soloing, allowing quicker and easier access to the scales you want.

For rhythm players jamming with others, bar chords allow you to play the same thing as the other players, and yet sound different. An open G sounds quite a bit different from a G played elsewhere on the fretboard, and the two played simultaneously sounds great. They really complement each other. So if you’re able to throw in the odd bar chord here and there, or even play your entire part using them, you’ll really be adding a new flavor to the song.

Because I’ve seen quite a few guitar players struggling to learn bar chords in particular, I decided to make a proper guitar lesson focusing on exactly that subject. The result is Bar Chords Made Simple, my newest 2 hour guitar lesson. At that link you’ll find a free guide that explains in detail how you can get started with your first bar chord. 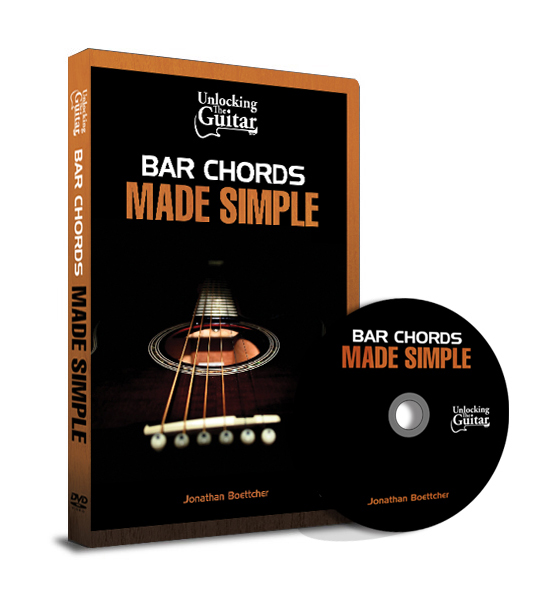 Who Should Learn Bar Chords?

This course is aimed at guitar players who have at least a minimum level of experience in playing open chords. If you’re comfortable playing chords like G, C, D, E, Am, Em, etc, then you’re ready for this course as a next step.

Likewise, perhaps you’ve played guitar for quite a while, but for whatever reason you’ve just never got around to mastering bar chords… if that is the case, then this course is also for you.

You’ll get a good, although brief, introduction to the fretboard, so this is a useful course for those who want to move on to soloing later on.

If you’ve ever attempted to learn bar chords before, and yet never quite managed to master them, then this course is for you. I’ve included a few “cheater” ways of getting part-way there without having to go all the way; nice half-way steps to get started with. I’ve also included finger exercises that will really build up your finger strength, stamina, and stretchability. (Sorry, I just had to throw another ‘s’ in there).

In Bar Chords Made Simple we’ll go through from the ground up, assuming nothing, so you’ll have a systematic approach to the fretboard and guitar chords that will serve you well, forming a great foundation for future studies.