1 Trick To Figuring Out The Key Of A Song 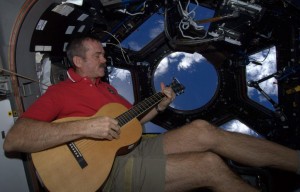 After spending 5 months in out space, last week Commander Chris Hadfield safely landed back on earth, with his two crew mates.

In case you weren’t aware, Cmdr Hadfield has gained fame as being the “guitar playing astronaut” even writing and performing music from outer space!

Pretty cool, if you ask me.

He even played a Canadian made guitar! (Larrivee)

But after a trip like that, nothing beats a safe landing…

Which brings me to today’s guitar tip! (were ya wondering how we were gonna get there?)

A lot of people have a hard time figuring out which key any particular song is in, and if asked, they will often (wrongly) tell you it is in the same key as the first chord of the song.

Problem with that is, you can start a song on any chord.

But just like Cmdr Hadfield, the story isn’t over until you’ve landed safely, and that’s the trick of the day – look at the LAST chord of the song, and not the first one!

What chord does the song RESOLVE on?

That should give you a good idea of what they key is.

There are other (more guaranteed) ways to find out which key a song is in, and I’ve gone into those in detail in my course Unlocking I IV V. You can find it here: