What I Learned About Playing Guitar From A Crazy African Driver 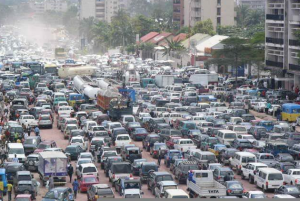 One smoking hot day back in 2004 I found myself sitting behind the wheel of a Land Rover Defender, stuck in the snarl of a major traffic jam in Monrovia, Liberia. (that’s West Africa)

The red dust hung heavy in the air, creating a halo effect around the sun, nearly blocking it out.

I’d been driving in Africa long enough to know it wasn’t anything like what I was used to back home. I knew you HAD to be more aggressive, or you’d never get anywhere.

But this traffic jam was worse than any I’d seen thus far. (not QUITE as bad as the one in the picture on the right though, thankfully!)

So there I was, sitting and waiting for my chance to cross through traffic, and it just wasn’t happening.

The AC screamed away, working overtime, but I was still sweating.

My Liberian co-pilot made it clear to me, the choice was simple:

If I ever wanted to get home, there was only one way – take the plunge and dive into traffic. Sitting and waiting would do me about as much good as an invisible traffic light.

Thankfully, driving a Defender gave me some confidence, because it was a lot larger (and sturdier) than most other cars zipping by. Nevertheless, it sure felt STRANGE and FREAKY nosing aggressively out into a stream of traffic that seemed to have no gaps or holes and no signs of slowing down.

But you know what?

That traffic parted for me. They didn’t much like it, but they stopped. And 10 seconds later, I was on my way again, heading home.

Sure – my shirt was a little more drenched in sweat than it had been a minute ago, but I’d learned a valuable lesson.

Over the years, I’ve had opportunity to watch guitar players take their first solo. Usually, it takes them a long time to learn that they need to play aggressively… at least, what they think is aggressively!

I’ve seen too many players play so timidly that no one can even hear them. They wait too long to come in, and then exit their solo at the wrong time too. No condemnation there by the way – it’s a skill that must be learned, just like anything else. However, some skills are easier to learn than others.

That day in Monrovia, I was in the hot seat (more ways than one) and I was learning that lesson, like it or not.

You have the option of learning how to solo on your own terms, simply by using jam tracks. That way, there’s no pressure from the band or audience – if you screw up, no worries – just try again! There’s an excellent collection of high quality blues jam tracks that are great for learning to solo over, right here.

You can use these jam tracks to build your confidence to the point where you can dive in between chords and squeeze off a choice lick.

That’s the kind of experience that most people have to learn the hard way. But not you – not if you use jam tracks.