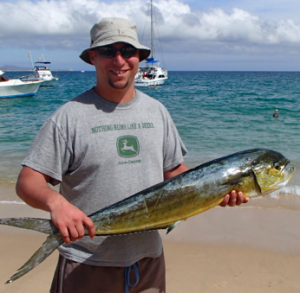 I’m not much of a fisherman, but last winter I was in Mexico for a week snatching a little R&R, and while there, somehow I found myself out on a boat, pulling in a nice Mahi-Mahi.

Today when I heard about this huge tuna that actually capsized the boat of the guy fishing for it, I remembered my own experience with a tuna… a tiny little guy, about 18 inches long.

Haha, not exactly the capsizing variety!

The above picture shows one of the Mahi-Mahi I got – not the little tuna! It was a great trip though, because although I didn’t know the first thing about how to catch a fish, the guys on board did pretty much all the technical stuff for me, and then turned the rod over to me once they had something on the other end.

If they’d have left it up to me, I’m sure we’d STILL be out there, trawling around wondering where all the fish were!

As a matter of fact, the way I fish reminds me a little of how some people play guitar.

We’d jam together, and he always steadfastly refused to learn a guitar scale.

Instead, he figured he could do it all by ear – essentially, just tossing his line in wherever he wanted, figuring that something would always come up.

Well, he did somehow get by, but the problem was, he caught a lot of old boots and bad notes in the process.

With a little direction (ie in the form of a scale pattern) he would have progressed MUCH more quickly, and had a far higher success rate, in terms of picking notes that actually sounded good.

I’m forever grateful for that experience with him, because an object lesson like that is invaluable.

Especially when you can learn it from someone else, and don’t have to go through it yourself.

So – learn from my friend’s mistakes, and learn how to use guitar scales while you’re soloing – your playing will really improve because of it.