Discover How To Follow The Chords In Your Guitar Solos

Discover how to laser-target your riffs to the progression, even if you don't have much guitar theory!

Would You Like To Know The Secret
To Crafting Amazingly Melodic Solos?

There's an open secret among musicians that at any given point in a song, there are three specific notes that are not only safe to improvise with, but have amazing melodic potential.

You see, when you start learning to solo, you need to learn your scales. Those give you all the good sounding notes for the key.

Then there comes a day when you want to go further.

When you want to begin custom-crafting your solos to fit the chord progression better than ever before.

That's when it's time to learn about something called triads.

A musical triad is simply a three-note chord. All of the major and minor chords that exist are made with only three notes. If you've got more notes in your chord, like in an open G major for instance (which has six), then you're just repeating notes that are already present, usually by adding octaves.

When that chord is being played in the song, any of those three notes are going to sound amazing when integrated into your solo.

The trick comes in finding other places and ways to play those notes, so that what you're playing really pops out and forms a great solo.

Every note - and every chord for that matter - can be found in multiple places on the guitar.

These three-note shapes, called triads, occur all over the fretboard, and when you learn to incorporate them into your riffs, can become a very useful and powerful framework for your solos.

If you're concerned that re-using notes that are already found in the song is going to be boring and uninteresting, then I've got great news for you.

Once you learn to laser-target your riffs to the chord progression, you will begin experiencing the thrill of playing truly melodic solos on the fly! Your solos will appear custom-fitted to the song.

And if you're concerned about being limited by using only three notes, that's not a problem either!

The fact is, I would never want to limit you to just three notes in your solos!

I'm simply advocating using those three notes as the framework for your riffs.

The amazing thing about triads is that although there are only three notes involved, the musical potential they offer is truly limited only by your imagination and creativity. I'm constantly hearing artists come up with ways to apply them that I've never dreamed of before!

You can go deep and learn the theory and every way to apply the patterns you can think of. In fact, I covered a lot of that stuff in my Secrets of Tasty Riffs & Solos course.

But you don't HAVE to be a theory wiz to make your solos shine.

You just need a few simple principles in place.

And, you need to see how it works, by demonstration.

That's exactly why I created a short course laser-targeted on demonstrating this stuff.

The Following The Chords Course

After the release of my Slow Blues in A course, the most common feedback I received was that the course had really helped people understand how to target their riffs to the chords in the progression.

And yet, they wanted more.

Following The Chords takes those same ideas in a different direction. We'll start by taking a simple chord progression that everyone has played a million times... D, C and G. Then, we'll supercharge that by adding some sweet blues riffs based on inversions to the rhythm part. 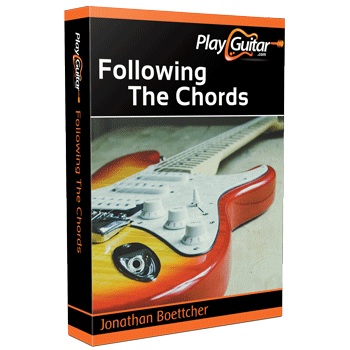 My guess is, by the time you nail the infectiously groovy rhythm part, you're already going to have a grin on your face and have loads of new possibilities flooding your mind. But then we'll move immediately into learning the five different solos.

At each step of the way, I'll explain how what we're playing relates to the chords in the progression.

Because we're using a simple progression, you shouldn't have to think hard about locating yourself in it when you jamming over top of it, which is really helpful. After all, if you're trying to learn something new, why make it harder than it needs to be?

Once you master targeting your riffs in simple chord progressions, it won't be a big step for you to move these skills to other progressions too.

A lot of courses like this one simply demonstrate what things need to sound like, and then move on. This one is different. I've recently had good feedback with a new approach that I'm calling the Copycat Solo Sessions.

In the Copycat Sessions, I'll play a portion of the solo that we've been working on, then the jam track will loop right at that moment, and I'll give you a chance to play the same piece, with the tab right onscreen if you need it.

This is all done in a single take, so there's no buttons to push, pages to flip, or anything else to distract you. You'll get to hear how I play, and then immediately, have a go yourself.

The benefit of this is enormous, because your ear is your best teacher. When you can compare back to back, your ear will quickly tell you the parts you need to work on, much quicker than if you didn't have that example fresh in your mind.

This is NOT a beginner course, and it is not a beginner's "learn-to-solo" course either. In order to really engage with this course and pull the maximum benefit from it, here's a short list of skills you should already have under your belt. In other words, if you don't have these already, the course will be a bit over your head, and you'd be better off to work on those foundations first.

Basic Guitar Theory - You don't need to be a whizz at your theory, but there is a lot of practically-applied theory in this course and it will be hard to follow if you don't know the basics of how chords, scales, and keys work. If theory is new to you, I recommend starting here instead. In particular, you need to know how chords are constructed, as we will be working with that a lot.

Basic Familiarity With Playing Lead Guitar - This is not a beginning-level "learn how to solo course." You should be comfortable playing some scales and riffs. Full tab is provided for everything we're learning, so it's helpful (but not required) to know how to read tab and/or standard notation.

In short, the Following The Chords  course is perfect for intermediate to advanced guitar players who have some experience soloing, have some foundation in theory, and are looking for new ways to express themselves melodically in a solo. The course supplement book (on PDF) included with the course truly supplements and adds to what you will find in the video. From theory to detailed discussions of riffs and patterns, you will find this an invaluable study tool.

Additionally, the Guitar Pro 7 files for the solo are included. If you happen to have that software, you may find this helpful. If you don't already have it, there's no need to go purchase it, it is merely a bonus offered to those who can take advantage of it.

Are You Ready To SOLO?

Following The Chords  is laser-focused on helping you develop your soloing ability. You'll learn great licks and how to apply them in a fun and practical manner.

Let’s work together to take your guitar soloing to levels that you never dreamed possible!

PS. You'll learn five sweet solos, plus an infectiously groovy rhythm part to play with the jam track. Every lick is broken down so you'll learn how to target chord triads with your solos!

PS. After you watch these lessons, you’ll be able to make your solos and fills fit the progression better than ever before.

PS. If for any reason at all you’re not satisfied, you’re protected by my 100% “No Weasel Clauses” 60-Day GUARANTEE